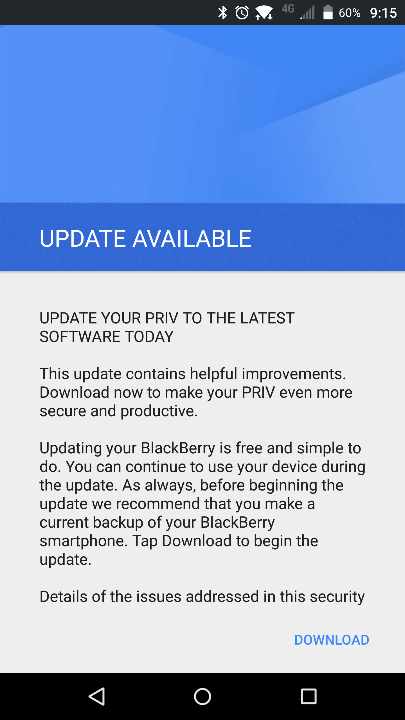 This advisory addresses an industry-wide elevation of privilege vulnerability that is not currently being exploited against, but affects, BlackBerry® PRIV smartphones. BlackBerry customer risk is limited by the inability of a potential attacker to force exploitation of the vulnerability without customer interaction. Successful exploitation requires an attacker craft a malicious application (app) and that a user install the malicious app. If the requirements are met for exploitation, an attacker could potentially gain locally elevated privileges. After installing the recommended software update, affected customers will be fully protected from this vulnerability.

WHO SHOULD READ THIS ADVISORY?

WHO SHOULD APPLY THE SOFTWARE FIX(ES)?

What factors affected the release of this security advisory?
This advisory addresses a publicly known vulnerability. BlackBerry publishes details of a software update in a security advisory after the fix is available. Publishing this advisory ensures that our customers can protect themselves by updating their software or employing available workarounds if updating is not possible.

Read the following to determine if your BlackBerry PRIV smartphone is affected.

BlackBerry 10 and BlackBerry OS smartphones are not affected by this issue. The shared Android™/Linux® kernel on the BlackBerry PRIV is impacted.

If your BlackBerry PRIV smartphone was purchased from a source other than ShopBlackBerry.com, please contact that retailer or carrier directly for urgent maintenance release availability information.

An elevation of privilege vulnerability exists in the shared Android/Linux kernel used in affected versions of BlackBerry PRIV smartphones. The kernel constitutes the central core of the smartphone’s operating system.

Successful exploitation of this vulnerability could result in an attacker gaining elevated privileges on the smartphone.

Mitigations are existing conditions that a potential attacker would need to overcome to mount a successful attack or that would limit the severity of an attack. Examples of such conditions include default settings, common configurations, and general best practices.

There are no remote vectors for this vulnerability.

Further, BlackBerry PRIV smartphones use a unique security system to prevent persistent compromise. Attempts to use this vulnerability to gain persistent elevated privileges on a BlackBerry PRIV are likely to fail with an error. Any compromise would not persist after a reboot.

By default, sideloading apps on BlackBerry PRIV is not permitted; users should check the DTEK by BlackBerry application for verification of their security settings.

Workarounds are settings or configuration changes that a user or administrator can apply to help protect against an attack. BlackBerry recommends that all users apply the available software update to fully protect their system. All workarounds should be considered temporary measures for customers to apply if they cannot install the update immediately or must perform standard testing and risk analysis. BlackBerry recommends that customers who are able to do so install the update to secure their systems.

BlackBerry recommends that customers should only download apps from trusted sources.

CVSS
CVSS is a vendor agnostic, industry open standard designed to convey the severity of vulnerability. CVSS scores may be used to determine the urgency for update deployment within an organization. CVSS scores can range from 0.0 (no vulnerability) to 10.0 (critical). BlackBerry uses CVSSv2 in vulnerability assessments to present an immutable characterization of security issues. BlackBerry assigns all relevant security issues a non-zero score. Customers performing their own risk assessments of vulnerability that may impact them can benefit from using the same industry-recognized CVSS metrics.

Trademark attributions
Android is a trademark of Google Inc.
Linux® is the registered trademark of Linus Torvalds in the U.S. and other countries.

BlackBerry would like to thank the Android Security team at Google Inc for their assistance in protecting our customers. We would also like to thank Zimperium for their contribution to the rapid resolution of this issue.

#IChooseBlackBerry 10#Coz it is not only a phone,but also a life way!

Latest posts by 一叶轻舟到天崖 (see all)

#IChooseBlackBerry 10#Coz it is not only a phone,but also a life way!